Try out our keto BBQ chicken recipe for a flavorful, low carb and easy to make Summer time dinner! Others who were looking for "Keto BBQ Chicken" were also interested in these recipes: This keto BBQ grilled chicken recipe is very easy to make, and it doesn’t require a lot of ingredients, only ones which can typically already be found in your kitchen. Thus, this is an ideal recipe for when you’re yet to do your grocery shopping but would still like to eat something hearty and delicious. Sugar-free BBQ grilled chicken never gets old and is a favorite amongst so many people. It could be paired with a lot of different keto friendly sides, such as roasted mushrooms, green beans, mixed grilled vegetables or even a side salad for a lighter meal. Thus, this dish can be slightly varied each time you make it, so it will surely not get boring! Keto BBQ chicken is such an easy keto dinner, perfect to make on a weeknight, especially for the Summer time! This recipe serves 4-6 people, so it can be made for the whole family. If you have any leftovers, you can always have them for lunch the next day or take them to work with you! Or use them to make my buffalo chicken stuffed avocados. Sugar-free BBQ chicken is also great to make if you’re invited to a potluck, as everyone tends to end up loving it, and if you’re following a keto diet you won’t have to worry that there won’t be any food suitable for you. You will have a delicious homemade meal while hanging out with the rest of the group! A lot of people who follow a keto diet think that they have to give up BBQ sauce and instead choose recipes with other low carb sauces. However, this recipe is made using sugar free BBQ sauce which makes for a good keto friendly alternative. Sugar-free BBQ Sauce is easier to get ahold of than you would think. There are brands which sell sugar-free BBQ sauce at the grocery store. Store bought sugar-free BBQ sauces are very convenient, especially when you’re short on time or want to quickly whip up a meal for your family. Two brands which sell Sugar Free, keto approved BBQ sauce are Lillie’s Q and Primal Kitchen’s. You can also find other brands which do sugar free BBQ sauce on Amazon. Primal Kitchen’s BBQ sauce is unsweetened, while the one sold by Lillie’s does have some Sucralose added, but it still sits at 2g net carbs and 0g total sugars. Sugar-free BBQ sauce is made without high-fructose corn syrup, which is not considered a good ingredient for anyone to be having, so keto BBQ sauce can also act as a slightly healthier alternative for the whole family. If you would prefer to make your own sugar free BBQ sauce, I have a homemade keto BBQ sauce recipe on my website as well. This works great within this recipe! It’s easy to make and can be made while the chicken is grilling, so you won’t be adding more time to the preparation and cooking of the dish. For this dish, any cut of chicken will work. In this recipe we use thighs, legs and breasts. The most keto approved cuts are thighs and legs because they are darker meat and have a higher fat content compared to the breast meat which is leaner. This will provide enough fats to help keep you satisfied while provide extra protein too.

How Long to Cook BBQ Chicken

In order to make the perfect BBQ keto chicken, there is a cooking method which one should follow. Start off with placing the chicken on the grill, skin side down for 10-15 minutes or until the skin is browned. Then, turn the chicken and baste it with keto BBQ sauce. Continue cooking it for 15-20 minutes. Turn on baste with more sauce and continue cooking for 5 minutes longer or until internal temperature reaches 160 degrees F. The chicken should then be removed from the grill and placed on a serving tray, where you should leave it to rest for 5 minutes before serving. This chicken can be cooked in the oven if a grill is not available. In order to get the perfect jerk chicken, bake at 300 degrees for about 45 minutes or until internal temperature of the chicken is 165 Degrees. Do keep in mind that the size of the chicken legs affects the time it takes for them to be properly baked. The larger the chicken leg size, the longer it would take for them to be ready. Moreover, 300 degrees is also the right temperature for the chicken legs to remain crispy! If you opt for oven baking the chicken, leaving it for a few minutes under the broiler at the end can help to crispen up the skin and it will also give the chicken that blackened appearance which it would have if it were cooked on a grill!

What Internal Temperature Should You Cook Chicken Legs to?

BBQ chicken should be cooked until the internal temperature reaches 160 degrees F. Make sure to allow the chicken to rest for 5 minutes before cutting. The internal tem-perature will continue to increase to 165 degrees F, which is when chicken is safe to eat. Taking it off the grill early like this will also keep the chicken from drying out and over cooking it while it rests. How to Cook Keto BBQ Chicken in the Oven

If you would prefer to cook the low carb BBQ chicken in an oven instead of on a grill, here are a few steps you should follow:

Step One: Prepare your oven

The only seasonings which this recipe requires is oil, salt and pepper. Brush your chicken with these ingredients to enhance the taste.

Bake in the oven for 15 minutes. 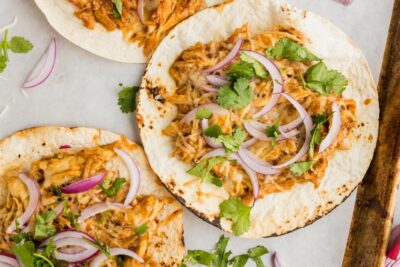 These keto BBQ chicken pizzas is a quick meal idea you can make with leftover chicken. Cook in the oven, grill or air fryer and dinner is ready in... 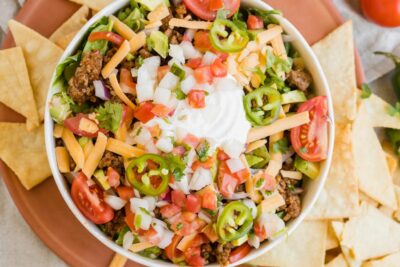 This healthy taco salad recipe is the perfect easy weeknight dinner. Drizzle sour cream and salsa over the top for a spicy and tangy finish to this... 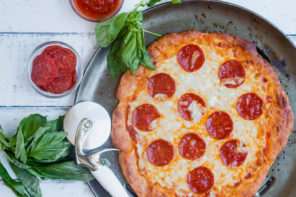